Aliens and the Author

Face in the Window (an Excerpt from FLASHBACKS, Ch. 4) 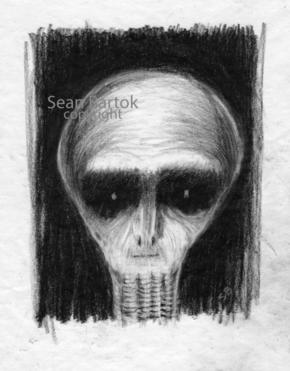 As I open the bedroom door I stop in my tracks. I am surprised, dumbstruck! Right
in front of me, not ten feet away and looking through the window screen at me, is the
ugliest son of a bitch I have ever seen in my life!

At first I don’t know what to think. I am in shock and yet mesmerized and not sure
what is looking back at me with such great interest. My mind is still foggy and I think this must be a joke some student is playing on me. Then I see the glint of a reflection off the deep set eyes of this ghastly person’s face.

Instantly I know it isn’t a student’s two dimensional drawing mounted on a stick and stuck in front of the window for me to see. The head almost fills the small window frame.  In the dim hall light, I can see that the structure of the head is like a three dimensional, oversized humanoid skeleton. It has huge eye sockets that are dark with only a glint to show a slick wet surface in the recesses of the dry skeletal frame. There is hardly a nose, only two vertical ridges, and small nostril openings that almost extend to what could be called a slit for a mouth. The cheek bones are exaggerated. The skin looks dry, and leathery. There is no hair to be seen, and the large head is not marked with the usual cranial ridges. Strangest of all, is that the lower jaw seems to have many vertical articulated tubes attached to it...

Before I completely comprehend what I am looking at, the neck and face move
down as though they are hydraulically driven; no lurches, no deviations, just a slow steady downward motion. The hideous face disappears below the window sill and is gone. I hesitate, and then lunge for the window and slam it down with great force and a big bang. Luckily glass doesn’t fly all over the room from the heavy impact of the frame hitting the window sill.

Sean and his wife, Sarah, have been married for 48 years, and have two children and four grandchildren. He and his wife live in a rural town in Colorado. Sean enjoys working in his studio, consulting, collecting, researching, and outdoor activities with his friends and family. Adopting a pen name to protect his family’s and his privacy was a difficult decision. 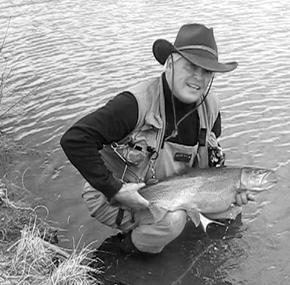